But what is fueling the growth of this culture? Whatever it is, everyone involved in the gaming culture has one thing in common -- they are all looking for the best gaming PC. And I know you are too. With the right information, you can find the perfect computer for all your gaming needs.

If you are new to the gaming world, you probably have some burning questions about gaming PCs, particularly which ones are the best. Here are a few answers to some of the questions you might have.

What exactly is a gaming PC?

A gaming PC is a desktop computer that is either custom or pre-built for the main purpose of increasing performance. This performance increase is needed to play modern computer games that require a lot of graphical and processing power. This especially true with the rise of VR gaming.

What is the biggest difference between a regular PC and a gaming PC?

When it comes to comparing a regular PC to a gaming PC, one of the most significant differences is video processing. While regular desktop computers do have integrated graphics cards, these are not up to the task of rendering intensive titles.

Gaming PCs, on the other hand, have dedicated graphics cards (GPU) that have their own RAM as well, and powerful cooling systems that afford the processors the ability to run at high speeds without burning themselves (and other components) out. And one important factor, while we are still on this point, is that gaming PCs have to be highly upgradeable.

And of course, another major difference is in the looks. Gaming PCs looked rugged and, well, hardcore.

Pre-built or custom-built -- which is the best gaming PC?

One of the biggest aspects of the gaming culture, apart from the actual gaming, of course, is to build your own gaming PC. The advantage of this is that you get exactly the specific configuration that you need for your specific gaming genre. Besides, building your own gaming PC is just plain fun.

But if you don’t have the time and know how (not much to learn by the way), getting a pre-built gaming PC is still a great option. You still get yourself a mighty powerful machine that can run the type of games you love.

How We Reviewed Gaming PCs

Another crucial factor we considered was customer reviews -- both negative and positive. This is important as it gives a real-life picture of the kind of experience you can expect from each gaming PC.

Of course, as many gaming enthusiasts will tell you, looks do matter when it comes to the best gaming PC. So, we considered that as well.

Where to Buy the Best Gaming PC (and Pricing)

With the proliferation of gaming PC manufacturers, getting a gaming PC has never been easier -- and cheaper. You can easily get an excellent machine from an online store like Amazon, eBay, Newegg, and many more.

Or if you choose to, you can go directly to the manufacturer’s website or retail outlet. But if you decide to get a custom-built gaming PC, you’ll definitely have to order from the builder’s website.

Now that we’ve gotten all that out of the way let the fun part begin. Let’s get you the best gaming PC that will afford you all the thrills you are thirsty for. 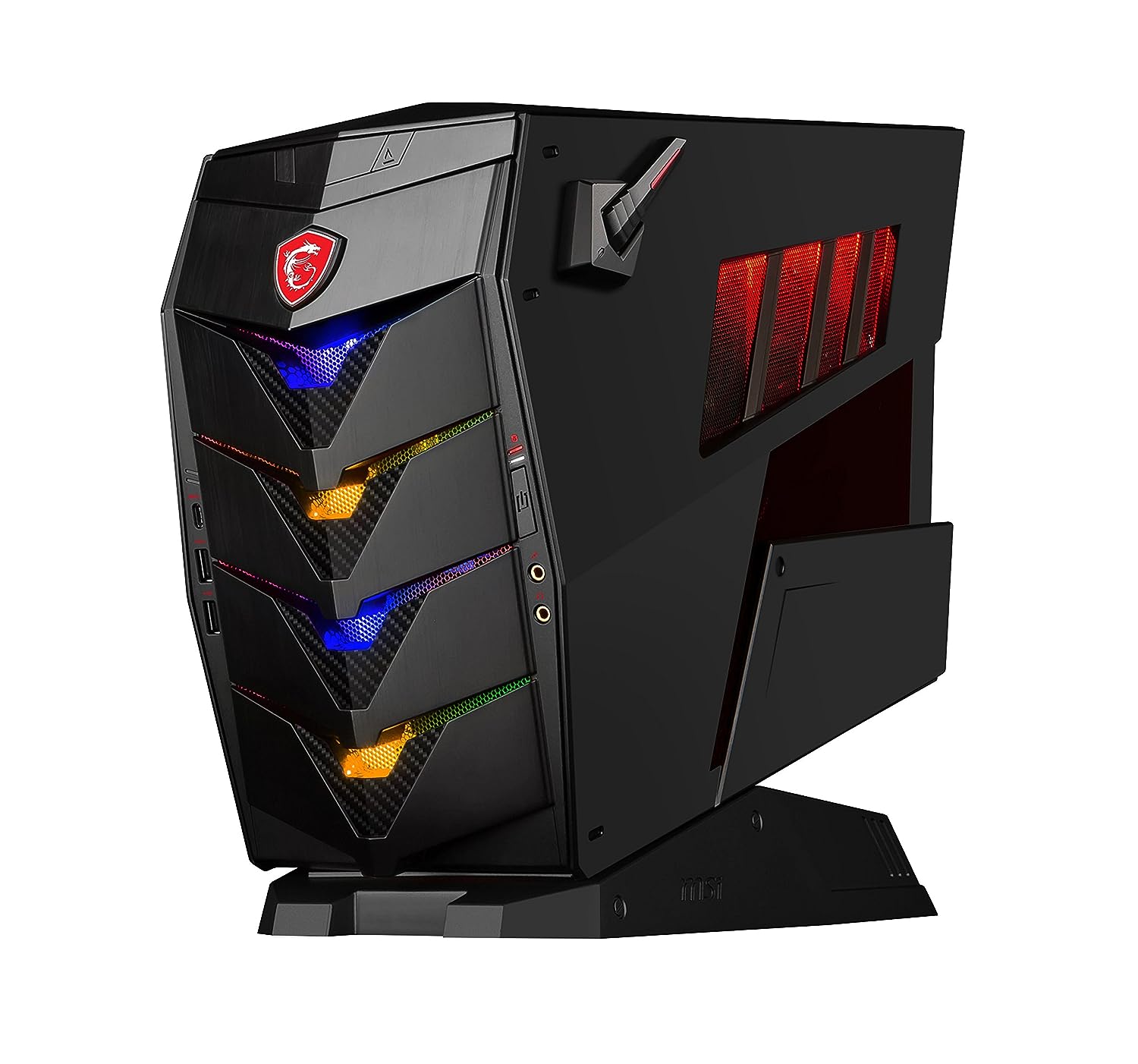 On your quest to find the best gaming PC, one that you will keep bumping into is the MSI Aegis 3. And that’s because it is a beast of a gaming machine. This gaming PC has a hardcore design that is reminiscent of a Decepticon’s head. It's definitely something that will inspire your gaming juices to flow.

Design-wise, apart from aggressive and otherworldy looks, the Aegis also has highly customizable, well-placed RGB lights. This is one gaming PC that deserves more attention than it’s currently getting.

When it comes to outpacing its rivals, the MSI Aegis takes gaming seriously, thanks to its 8th generation Intel CPU and top of the range Nvidia GPU. If you are keen to jump on the VR gaming bandwagon, the MSI Aegis comes VR-ready, so all you have to do is connect your Oculus Rift or HTC Vive headset, and off you go into the worlds of VR.

And for such a powerful machine, the Aegis is surprisingly quiet as you will hardly hear the fans whirring even when under load. This is all thanks to its excellent cooling system.

The MSI Aegis 3 -- Gaming power from another dimension

One of the few flaws that come with this awesome gaming PC is that when you feel it’s time to upgrade it, you’ll find the chassis a bit difficult to open. However, once you manage, this is one highly upgradeable PC. 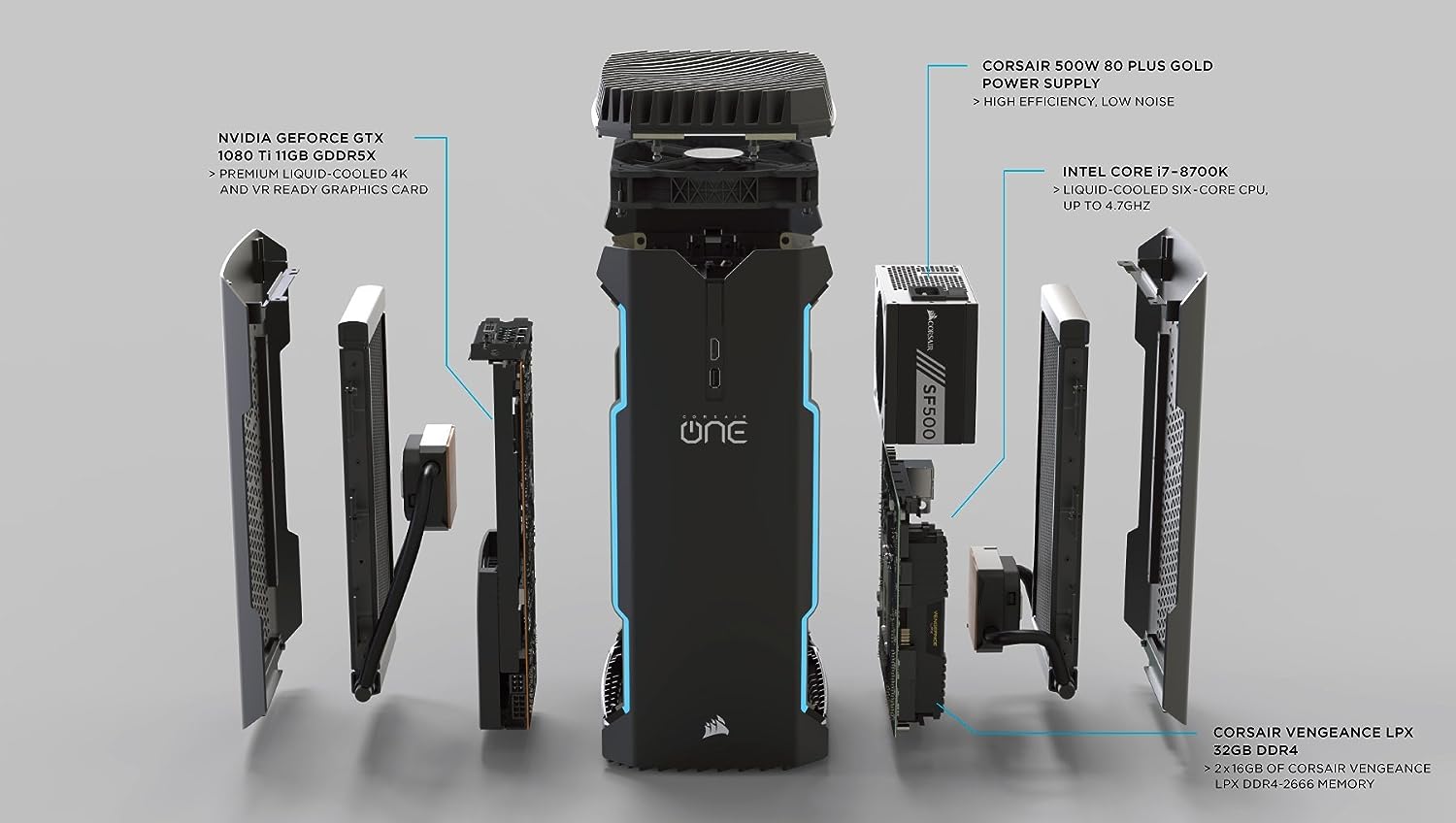 If by the best gaming PC you mean premium gaming, then the Corsair One Elite is exactly what you are looking for. Corsair has become synonymous with custom-built PCs and high-end components, so it’s no surprise really that they should also be in the race for the best gaming PC.

The Corsair One Elite is a beautiful gaming computer that will be at home anywhere in your home, even right next to your TV.

For those who are familiar with Corsair, the Elite is a huge improvement over the first Corsair One. The tiny case is packed with high-end components (as is to be expected from Corsair) such as an 8th generation Intel Core processor, a powerful Nvidia GeForce GTX 1080 Ti GPU, and an amazing cooling system to ensure that this gaming PC performs at its peak levels.

As is to be expected from such a well-specced gaming PC, the Elite One is VR-ready. And when it comes to doing what it was created to do, this gaming PC will tear through every title you throw at it without breaking a sweat.

The Corsair One Elite -- Elite gaming at its best

This is one gaming PC with few flaws, the major one being the hefty price tag. 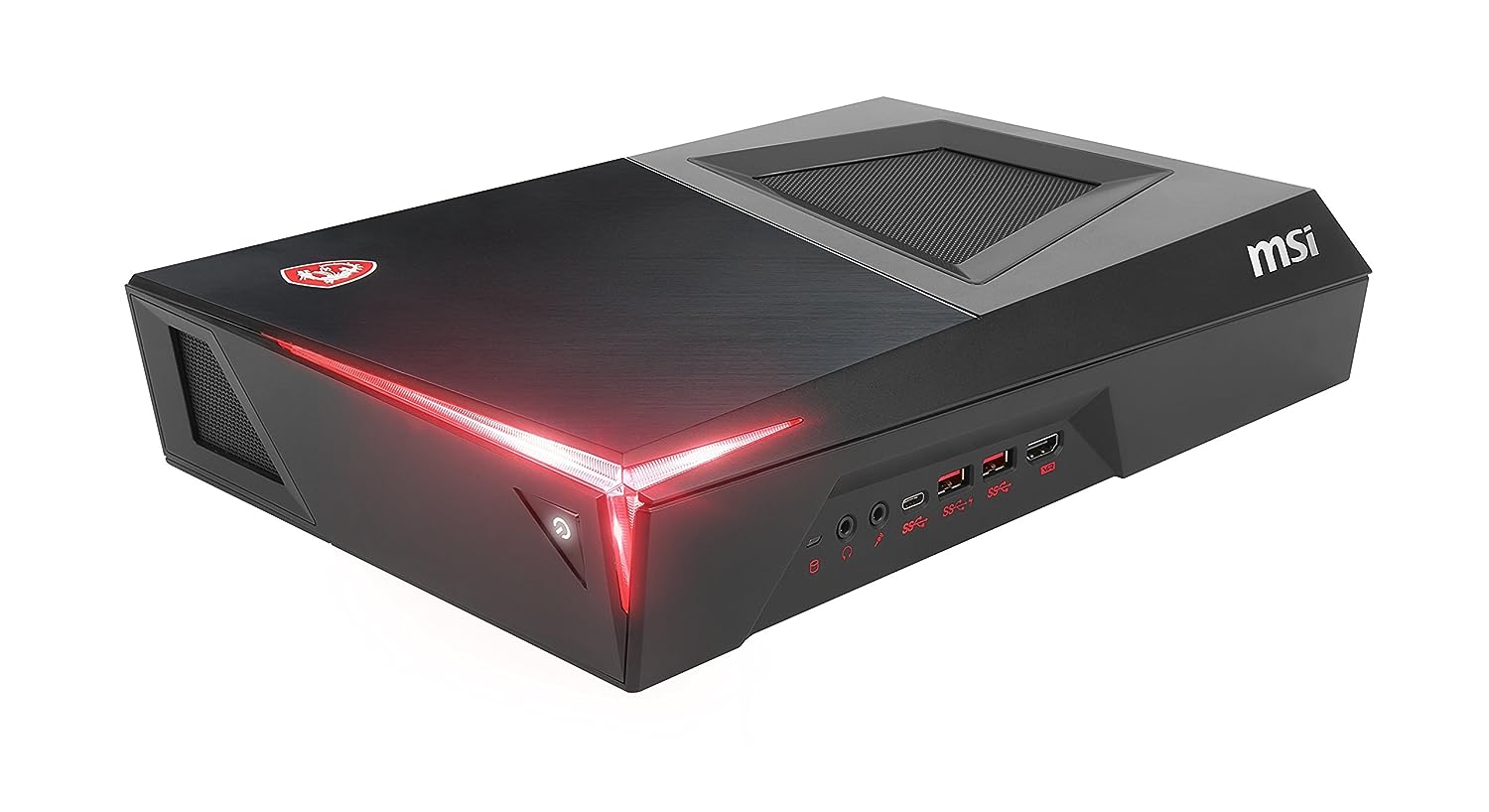 The MSI Trident 3 has been making some pretty big waves on the gaming PC market -- and that's mainly because of its diminutive size. While many gaming computers feature massive form factors, the Trident 3 packs massive power in a chassis slightly bigger than an Xbox.

The design is something else MSI did well on this tiny titan as it looks gorgeous in its all white (or black) paint that is only broken by a few RGB lights and the power button.

Despite its small form factor, the Trident 3 can easily outpace full-sized gaming PCs thanks to its powerful CPU, GPU, RAM, and storage combination and configuration. Because it packs full-size processors and graphics cards, you can enjoy the latest titles (like GTA V) on ultra-settings without experiencing any tearing or stuttering. As for VR gaming, the MSI Trident 3 packs enough power to afford you the pleasure of stepping out of this world, something shocking for a PC of its size.

The MSI Trident 3 is definitely worth considering as you hunt for the best gaming PC. One of its biggest advantages is that despite its tiny frame, it is highly-customizable, except for the 330W power supply. That is a big disadvantage as it means you will have to be extra careful to select components that aren’t power hogs. 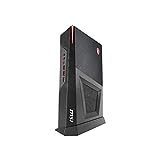 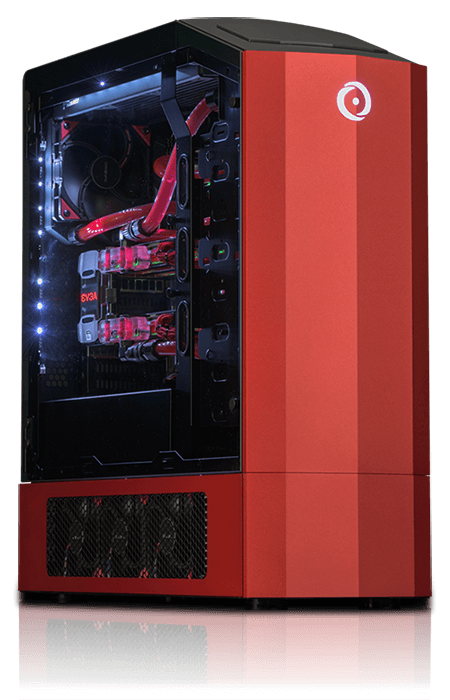 If you’re looking to build a custom gaming PC, then you’d better head over to the Origin PC website and order the Origin Genesis. The Origin Genesis is fast becoming the go-to gaming PC for enthusiasts who are looking for breakneck performance that comes as a result of the perfect combination of quality components.

If looks are part of your criteria when looking for the best gaming PC, you’ll definitely appreciate the stunning looks of this high-performance gaming computer.

The Origin Genesis towers above the competition in more ways than one. First of all, this is a full tower gaming PC. Second, when it comes to specs, it comes with all the latest goodies on the market. When it comes to performance (both gaming and productivity), the Genesis doesn’t play games. To put this in perspective, the Genesis maxed out the SteamVR Performance to score an astounding 11. When set to 4K settings, it managed an average of 48 fps, beating the category average of 33 fps by far.

​​​​The Origin Genesis -- The start of a new gaming era

One of the biggest advantages that the Genesis brings to the table is that it comes with Origin PC professional overclocking. This makes it a gaming PC to reckon with. The major flaw that we found in this gaming PC is that, despite having ports galore, they are top mounted. This can lead to an unsightly mess if you have many accessories you want to connect.

When it comes to the best gaming PC, no quest can end without mentioning the venerable Alienware. On this list, it’s the Area 51 Threadripper Edition.

The Alienware Area 51 sports a triad-design that is true to its name -- Alien. The triad-design makes it look like a super gaming machine from another planet. Although this has been its look since it was introduced in 2014, the design has not lost its allure.

It’s not just the looks that are out of this world when it comes to the Area 51, as performance is off the charts, which is exactly what is to be expected from AMD’s Ryzen Threadripper CPU paired to an equally powerful Nvidia GPU. Throw the most intense titles at this gaming rig, and it will eat them for breakfast. The Alienware Area 51 is a machine that pushes the limits of gaming and yet manages to keep its cool, thanks to Alienware’s advanced cooling systems.

Looking for the best gaming PC? This could well be it -- if you have the deep pockets required to bring it home that is. 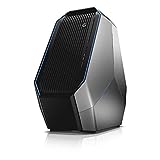 Game on -- The Best Gaming PC for You

Now that you’ve seen the top five gaming PCs to help you get your game on in 2019 there’s only one thing left for you to do -- pick one. With a premium selection before you, one thing is certain, all these machines are more than capable of quenching your thirst for adventure.

However, if you are struggling to make up your mind, may I suggest the MI Trident 3 if budget (both space and money) is a concern. But if budget is not a big issue, then the Origin Genesis is one you should give a second look.

The Lenovo Gaming Laptop: Power and Performance at a Perfect Price