Gamers mean serious business when it comes to their computer rigs. That’s why many have been wondering if the Lenovo gaming laptop line, the Legion, is up to the task. Apart from having a cool name, is there anything else to write home about?

Lenovo has a reputation for making some pretty impressive computers for productivity, and at equally impressive budget-friendly prices. So when they decided to dip their toes into gaming, it caused quite a buzz of excitement. With some recent upgrades to the Lenovo gaming laptop line, are they worth considering? Well, the only way to find out is to spend time with them. So let’s get to it, shall we?

Lenovo Gaming Laptops -- The Dawn of a New Era in Gaming

Lenovo PC International was actually founded as Legend in Beijing in November of 1984. The company quickly grew to be a big player in the PC industry, thanks to their acquiring IBM’s PC business in 2005 and later their Intel-based business in 2014. One of their biggest achievements is the ThinkPad line of laptops, which is the only laptop certified for use on the International Space Station. With all these achievements and more under their belt, Lenovo decided to make their presence felt in a fast-growing and lucrative niche: gaming computers.

Although coming a bit late to the world of gaming, Lenovo gaming laptops have actually managed to make some impressive strides in making gaming more affordable to the masses. In fact, you could say Lenovo ushered in a new era of gaming -- budget gaming especially.

While it’s impossible to cover everything you need to know about the Lenovo gaming laptop line, it is possible to answer a few of your most pressing questions. Let’s get to it then, shall we?

Is a Lenovo gaming laptop good enough for VR?

Ah yes, the VR gaming craze. If you want to get in on this gaming phenomenon you’ll need to ensure that the Lenovo gaming laptop you’re planning to get has a minimum processing power of an NVIDIA GTX 1060 or AMD R9 390 for graphics. As for CPU, a fourth-generation Intel i5 processor will serve you well.

That being true, you’ll find that Lenovo has equipped most of their gaming rigs with above average specs, so you’ll definitely enjoy VR.

Can I trust a Lenovo gaming laptop to be durable?

One thing Lenovo is known for is building quality products. A great example is the ThinkPad. So when it comes to durability, you’re in good hands with Lenovo.

How much should I expect to pay for a Lenovo gaming laptop?

Interested in bringing a Lenovo gaming laptop home? Expect to fork out depending on iteration and specs.

An Insider Look at How We Reviewed Each Lenovo

Before we go shopping, let me quickly outline our review process. That will give you the peace of mind to know that this is a review you can trust. First and foremost, we looked at the specs of each laptop. These allow us to see how each laptop theoretically performs.

As you go on your quest for a new (or replacement) Lenovo gaming laptop, there are three highly rated models you will find. Let’s go ahead and take a look at them:

If you’re looking for an entry-level gaming laptop that will satisfy your thirst for adventure, then meet the Lenovo Legion Y530. What’s under the hood? Glad you asked.

One thing you’ll appreciate right off the bat about this Lenovo gaming laptop is the design. For a budget gaming laptop, the sleek design is actually misleading as this laptop will look at home among other tuxedo donning laptops. And to top off its good-looking outer shell, the Lenovo Legion Y530 comes with a beautiful 15.6-inch FHD panel and a red backlit keyboard that welcome you when you open the lid.

When it comes to what the Legion Y530 is intended to do, it certainly won’t let you down. Thanks to a seventh generation i7 processor and a very capable GeForce GTX 1050Ti graphics card, you’ll definitely be able to burn through most of the modern titles you love. The only caveat is that you won’t be able to do so in high resolutions. While the GeForce 1050Ti graphics card is good enough to allow you to run through Hitman at 1080p, don’t expect to go VR with this gaming laptop. It just won’t handle it.

If you want a laptop that will give you the best of both worlds, business and pleasure, then you’ll find the Legion Y530 up to the task when it comes to taking care of business. Whether it’s number crunching, casual multimedia creation, or big data analysis, this Lenovo gaming laptop will take it all in stride. To put it in perspective, the Legion Y530 can easily match 65,000 names to their corresponding addresses in just under a minute.

If you’re a casual gamer and can get past the paltry four-hour battery life and “leaky” screen, then go for it. The Legion Y530 is probably one of the best entry-level gaming laptops on the market.

Besides looking more menacing than a legion of Roman soldiers, this Lenovo gaming laptop is a head turner. And that’s especially true after you lift the lid to show off the programmable RGB backlit keyboard. Or when you turn up the volume to reveal the superior sounding Dolby Atmos. It’s so good it makes you feel like you’re inside the game. Whatever it is, the Lenovo Legion Y720 is definitely a gaming laptop that commands attention.

The Lenovo Legion Y720 is for gaming. That shows in the way it handles itself on the battlefield. Take for instance when it took on the task of transforming players into Agent 47 in the popular game Hitman. Played at 1080p and on Very High settings, the Legion Y720 rendered the game at 62 frames per second, 7 frames per second better than the mainstream average of 55.

While the LegionY720 can take you into the virtual world via a VR headset, it isn’t the best gaming laptop for virtual reality. This is one of the best VR ready gaming laptops you can find.

With a seventh generation i7 processor, 8GB of RAM, and 256 PCIe SSD, this Lenovo gaming laptop is configured to tackle all of your everyday tasks and more. If you’re a multitasker, you’ll find that the Legion Y720 won’t skip a beat, even with 30 tabs open. Yes, even with one of those streaming and another downloading something as intensive as a game. As for multimedia creation, that’s a piece of cake as far as the GeForce GTX 1060 is concerned.

If there’s one Lenovo gaming laptop that offers an exceptional value for your money, this is it. Although it does have its flaws, like an average display, this gaming laptop is actually a great bargain.

The Lenovo Legion Y920 is the latest addition to the Lenovo gaming laptop family. And just like a diva, coming late to the party is actually a great platform for a grand entry.

Right off the bat, it’s obvious that this is a big laptop. But it has to be if it is to feature the massive 17.2-inch FHD display it comes with. And with all the bells and whistles it has, this laptop has established Lenovo as a force to reckon with in the gaming fraternity.

One neat feature that deserves mentioning is that you can overclock the Lenovo Legion Y920 at the touch of a button. But even in this overclocked mode, it still manages to keep its cool impressively.

Thanks to its overclockable 2.9-GHz Intel Core i7-7820HK processor and 16GB of RAM, multitasking is a breeze with the Legion Y920. Even with over 25 tabs open, with some streaming and downloading, this Lenovo gaming desktop won’t skip a beat. And if you need that little extra processing power, the overclock button will push the CPU beyond its normal limits.

You should be aware that as good as it looks and sounds, it does have its flaws, one of them being that it throttles when overclocked. But with a headset on, this isn’t much cause for concern. Lenovo gaming laptop is definitely one to keep an eye on as you search for your next gaming machine.

Being good in a race all on your own is nothing worth bragging about. Therefore, let’s pit the Lenovo gaming laptop line against some of its most formidable foes, shall we?

Acer is one of the big boys when it comes to gaming laptops. One worthy contender from this stable is the Acer Predator Helios 300. And yes, many a gaming laptop has fallen prey to its predatory tendencies -- true to its name.

With a beautiful red backlit keyboard, sharp display, and a well-designed shell, this is one eye-catching gaming laptop. But then again, looks alone don’t make for a great gaming rig. That’s why the Acer Predator Helios 300 has the brawn to match its beauty.

With a GeForce GTX 1060 GPU and a seventh generation Intel i7 processor to boot, this gaming laptop can handle any title you throw at it, including VR. Having said that, if you can live with the lackluster screen, then this laptop would make a great alternative to the Lenovo Legion Y720. 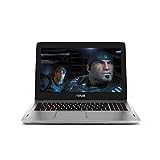 Asus has made a name for themselves in the world of gaming with their ROG series, including on the competitive stage. One of the most popular models in mainstream gaming is the Asus ROG Strix GL502VM.

True to its eSports DNA, the ROG Strix GL502VM is a powerful performer. Despite its power, it manages to keep its cool (and silence) pretty well. And to add to the experience, the ROG Strix also has a powerful set of speakers for a fully immersive experience. Whether you want to play your games at 1080p at Very High or whether you’d rather don your Oculus Rift headset for VR gaming, the ROG Strix takes it all in stride.

Dell’s Alienware gaming division has been instrumental in bringing amazing gaming experiences to the masses. And one model that gives Lenovo, particularly the Legion Y920, stiff competition is the Alienware 17.

The Alienware is a beast of a gaming laptop that gives even desktops a run for their money. With a powerful GTX 1070 GPU, this gaming laptop rips through VR games without batting an eyelash. Couple that to the beautiful design, and you’ve got yourself a gaming laptop to be proud of.

Although it features a previous generation GPU and CPU, the Alienware 17 can match some newer models when it comes to performance and looks. And for that, the Alienware wins this one.

Take Your Gaming Seriously With a Lenovo Gaming Laptop

Lenovo has made great strides in the cutthroat world of gaming. And while you may be tempted to give their gaming computers a casual look and pass them by, it’s time you start to take notice. And one such Lenovo laptop you need to consider strongly is the Lenovo Legion Y720. It offers the best value for your money. But the Legion Y920 is a good deal too, especially when you consider that it comes with the latest Intel i7 processor.

Whichever Lenovo gaming laptop you pick though, you can rest assured it will serve you well -- both in business and in pleasure.