Often, whenever gaming computers are the center of a conversation, one of the points that always come up is how expensive they are. But not for some, like the Lenovo gaming PC.

Getting a budget-friendly gaming computer that doesn’t compromise when it comes to performance is not as far-fetched a dream as it used to be. With many manufacturers joining the pre-built gaming computer race, the future is becoming brighter for those without the skill or time to put components together into a custom build.

Getting to Know Lenovo

Lenovo PC International is a Chinese multinational technology company that was founded in Beijing in 1984 (as Legend) and its headquarters are in Beijing, China and Morrisville, North Carolina. The company develops, manufactures, and sells personal computers, tablets, smartphones, workstations, and a whole lot more.

In 2005, Lenovo acquired IBM’s PC business and nine years later (in 2014) also acquired their Intel-based server business. In the same year, they also purchased mobile phone handset maker Motorola Mobility from Google. This rapid growth in the company is a great sign that Lenovo means serious business when it comes to supplying good equipment.

Although Lenovo jumped on the prebuilt gaming computer bandwagon later than most of their rivals, they still made it to the party. The Lenovo Legion line of gaming computers and laptops was Lenovo’s answer to many consumer’s cries for a budget gaming computer that still delivers exceptional performance.

Now that you’ve seen the caliber of Lenovo as a company, perhaps you’re wondering if that pedigree also filters down to their products -- particularly their gaming computers. Let me quickly answer a few of your questions so as to help you make an informed decision at the end.

How good is a Lenovo gaming PC?

In short, any Lenovo gaming PC you get will be as good as most of the best in its category.

Can I upgrade my Lenovo gaming PC?

If there’s one thing gamers love, it’s tinkering with their rigs. And if you’re such a one, you’ll be glad to know that one of Lenovo’s selling points when it comes to their gaming computers is that they leave tons of room for upgrading. This means when you buy a Lenovo gaming PC, it comes ready for the future. All you will have to do is add the components you need to keep your gaming PC up to date with the current technology.

How much should I expect to spend on a Lenovo gaming PC?

This is probably going to be where you fall in love with the Lenovo Legion line of computers -- they are very affordable and available from Amazon and Lenovo. But to put it in perspective, depending on the model and specs you opt for.

How We Reviewed Each Lenovo Gaming PC

Now that you understand what you are getting yourself into when you get a Lenovo gaming PC, let me show you how we reviewed these awesome gaming machines. Our first criteria in reviewing these Lenovo gaming PCs are the technical specifications and the build quality of each PC. Secondly, we considered the reviews of customers who have had firsthand experience with these gaming PCs.

Ready to get your game on? Let me show you five great Lenovo gaming PCs that you can rely on, and that without burning a big hole in your pocket.

If you’re looking for a small form factor gaming desktop that won’t take up much space on your desktop and leave a big dent in your budget, then the Lenovo Legion Y520 Tower (Y520T) is exactly it.

Lenovo has done a great job of revamping their line of gaming computers, especially as far as looks are concerned. The Lenovo Y520 looks aggressive and ready for battle thanks to its sharp edges and great lighting.

When it comes to performance, what you pay for is exactly what you get with this budget Lenovo gaming PC. The Nvidia GeForce GTX 1050 Ti graphics card isn’t powerful enough to run the latest titles at very high settings, but you can get by with low or mid settings and manage an average of 35 (up to 60 according to Lenovo) frames per second. As for VR, the GTX 1050 Ti, unlike the base GTX 1050 model, is capable of running VR, albeit at very low settings.

As for productivity, the Lenovo Y520T is powerful enough to handle almost everything you throw at it. Everything except for intensive video editing. That's due to the GeForce GTX 1050Ti graphics card not being up to the task of professional multimedia creation. As for multitasking, this Lenovo gaming PC managed to hold its own with 20 tabs open, video streaming, and web browsing.

The Lenovo Y520T: a taste of more to come

Overall, if you want to dip your toes into the waters of gaming without busting your budget, this a good place to start. But the best part about this Lenovo gaming PC are the hand screws that give you easy access inside – a sign that this is one PC you can upgrade down the road. The only downside to this PC is that it is a bit underpowered. Promises a lot of exciting gaming for entry-level gamers. 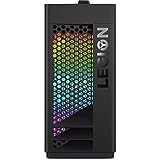 If you are looking for a more powerful Lenovo gaming PC, then the Lenovo IdeaCenter Y900 will not disappoint. This massive tower is not just big in size, it’s also big on performance.

Sporting a bold looking chassis with some internal and external LEDs to accentuate, this is one Lenovo gaming PC that has enough power to tackle everything it comes against.

The Lenovo IdeaCenter Y900 comes with an overclockable (denoted by the “K”) Intel Core i7 processor and a powerful GTX 1080 card. This combination is more than enough to power your gaming experience and is more than capable of whetting your appetite for adventure. Managing frame rates around the 63 fps on Grand Theft Auto V on high settings (160 on low) this beast of a machine definitely is up there with some of the top performers in its category. As for VR gaming, the Y900 is more than capable of running the latest titles without any hesitation.

One factor that lets this Lenovo gaming PC down is the cooling system. Unlike some of its competitors (like the Alienware Aurora R6) that come with liquid cooling, the fans on this rig can detract from the fun when it’s under a heavy load. But apart from that, this gaming laptop is a very good investment, especially since upgrading is a cinch.

Another great Lenovo gaming PC you should consider is the Lenovo​​ Legion T730. This is one of the latest addition to Lenovo’s gaming PC line up and it definitely promises some exciting performance.

The Legion T730 comes in an aesthetically pleasing chassis that is rather subtle when compared to the design of other gaming computers. Featuring customizable RGB lights, it offers an exceptional experience.

The Legion T730 is a VR-ready gaming PC that is ready to give you the fully immersive experience you are seeking. Thanks to the overclockable 8th generation Intel Core i7 CPU with 16GB RAM coupled to a powerful Nvidia GeForce GTX 1060 GPU, you can expect to play your favorite titles without any stutter from this Lenovo gaming PC. And if you get tired of the level of performance in the future, all you need to do is unscrew the hand screws that give you access into the belly of the beast for an easy upgrade.

While the Legion T730 has a lot going on for it, it does have a few limitations. For one, the storage is a bit small to accommodate a number of titles. Other than that, you get a great gaming computer with plenty of ports and options to upgrade in future.

Nicknamed “The Centurion” the Lenovo Legion Y720 Tower (Y720T) is a beast of a gaming machine that comes powered by AMD’s new Ryzen processors.

The Lenovo Legion Y720T design keeps the gamer in mind, not just because it looks gamey, but because it boasts some of the best components on the market.

Put to the task, the Legion Y720T didn’t fail to impress. It managed to race through” Rise of the Tomb Raider” at 60fps and “Overwatch” at a blazing 162fps at 1080p Very High settings. And if you want to take a trip into virtual worlds, the Legion Y720T can handle any VR game as it comes VR-ready.

But the Legion Y720T is not just a gaming machine. It also handles multitasking with ease. You can easily Livestream, update your gaming library, record, and much more without any lag in performance.

The Lenovo Legion C730 Cube was designed to impress. The design is compact, simple, and very impressive. And for those times you want to go out with it, it comes with a very handy handle. How cool is that?

Lenovo really got things right in this iteration of their C-series of compact gaming cubes. They may not be the smallest compact gaming PCs on the market, but they still manage to look at home next to your TV.

If you’re looking for gaming power you can take anywhere, this is it. It features an 8th generation overclockable Intel i7 six-core processor. It also has a Nvidia GeForce GTX 1060 graphics card. This Lenovo gaming PC is game for whatever title you will be in the mood for. And for a compact gaming PC that packs so much power, it surprisingly manages to keep its cool even under load, thanks to its dual thermal cooling system. Opening this cube up for upgrades is super easy and requires no tools, another bonus you get with this Lenovo gaming PC.

The Lenovo Legion C730: Cute and cuddly but very competitive

Although unrated, this new addition to the line of Lenovo gaming PCs is definitely set to impress. Depending on the configuration you opt for, this is a very affordable gaming computer that will give you more bang for your buck.

The Lenovo Gaming PC: How it Stacks Up Against the Competition

When it comes to gaming computers, there’s a wide pool of brands and models from which to choose. How does Lenovo stack up to the competition in this cutthroat niche? 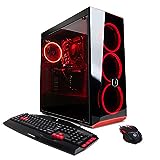 CyberPower is a rising star in the gaming PC industry. And for a newcomer, they are doing quite well.

Thisgaming PC is fast becoming the fan favorite for those looking for a budget gaming computer. Good as it is though, it is lacking when it comes to build quality, especially compared to Lenovo who take pride in producing quality machines.

This PC could be the rig to give the Lenovo gaming PC line a run for their money. Unfortunately, when it comes to technical support, Dell struggles to deliver as well as Lenovo, giving the latter an upper hand.

The iBuyPower​​ gaming computer is another great budget option on the market.

The only downside is that the quality components aren’t done justice due to lazy construction.

The Best Lenovo Gaming PC for You

If you’ve decided to settle on a well-known brand, respected for producing quality computers, then you won’t regret whichever Lenovo gaming PC you purchase. With great tech support, excellent upgrade options, and budget-friendly prices, Lenovo has done pretty well in giving the masses what they have been crying for.

And if you’re wondering which Lenovo gaming PC to settle for, may I recommend the Legion C730 Cube? Besides being Lenovo’s latest offering in the gaming department, it’s a great gaming computer that can tackle anything you throw at it.

The Lenovo Gaming Laptop: Power and Performance at a Perfect Price